Adopt Me! Wiki
Register
Don't have an account?
Sign In
Advertisement
in: Shops, Baby Shop, Toys,
and 9 more

View source
watch 02:34
Fire Emblem Warriors: Three Hopes - The Loop
Do you like this video?
Play Sound
Not to be confused with Christmas Doge Rattle.

Click to shake; leaves behind blue and purple trail

The Doge Rattle is a common toy in Adopt Me!. It could be bought in the Baby Shop for

175. This item could be found between the Unicorn Rattle and the Squid Rattle. When purchasing, the player had the ability to choose the color of the handle. However, this color cannot be changed later on or when the toy is traded. It was removed from the game on June 24, 2021 and can only be obtained through trading.

The Doge Rattle, as true to its name, features a doge head attached to a white rattle stick with a handle on the bottom. It leaves behind a blue and purple trail whenever a player walks around while holding it.

To interact with this toy, the player clicks their screen to shake it back and forth. It has a counterpart called the Christmas Doge Rattle. 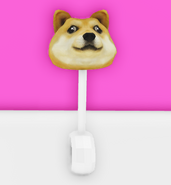 The Doge Rattle on display in the old Baby Shop. 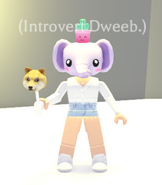 A player holding the Doge Rattle.

The trail of the Doge Rattle.
Community content is available under CC-BY-SA unless otherwise noted.
Advertisement