The Dog is one of the two common pets in Adopt Me! that players can hatch from a Starter Egg, with the other being the Cat. Either pet can be obtained for free when a player starts the game. The Dog can also be obtained through hatching a Retired Egg or through trading.

The Dog has a yellowish-beige body, head, ears, and a stubby tail. On its face, it has black eyes, a black nose, and a short mauve tongue poking out. Like almost all pets, the Dog has small, semicircle feet that appear to float underneath its body.

Here are the tricks the Dog learns in order:

The Neon version of the Dog glows highlighted light blue on its ears, tail, and paws while the other parts stay the same.

The Mega Neon version of a Dog glows in the same areas as the Neon Dog, except it cycles through the colors of the rainbow. 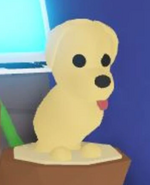 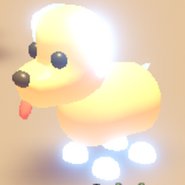 The Dog on the Adopt Me!'s thumbnail.
Community content is available under CC-BY-SA unless otherwise noted.
Advertisement