Adopt Me! Wiki
Register
Don't have an account?
Sign In
Advertisement
in: Pets, Limited, Interactable,
and 6 more

The Dodo is a small light pink bird with beady black eyes. It has pale purple and mint colored feathers on the tail with two small wings. The wings of the Dodo are lavender with sky-blue and pastel-toned feathers. The Dodo additionally comes with yellow feet. It has a long, yellow beak, with purple on the tip. There are two small pink feathers that are located on top of its head.

Listed below are the tricks the Dodo learns in order:

The Neon Dodo glows bright blue on its beak, the two little feathers on the top of its head, the tips of its wings, and its feet.

The Mega Neon Dodo cycles through the colors of the rainbow on the same areas as the Neon Dodo. 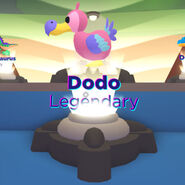 The Dodo on display in the Fossil Isle Excavation. 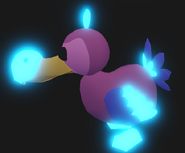