Adopt Me! Wiki
Register
Don't have an account?
Sign In
Advertisement
in: Pets, Uncommon Pets, Limited,
and 5 more

The Dingo is a limited uncommon pet which was added to Adopt Me! on February 29, 2020. As it is now unavailable, it can only be obtained by trading or by hatching any remaining Aussie Eggs. Players have a 25% chance of hatching an uncommon pet from the Aussie Egg.

The Dingo has a similar appearance to the Shiba Inu color-wise and shares a similar model to the Wolf. It has brownish-beige fur with its underbelly being a lighter shade of beige, and a brownish-beige tail. The Dingo's ears are perked up. It has two black beady eyes and a black nose.

Here are the tricks the Dingo learns in order:

The Neon version of the Dingo glows bright lime-green on the inside of its triangular ears, on its paws, the tip of the nose, and all over the tail.

When made, the Mega Neon Dingo’s neon accents cycle through the rainbow-like most Mega Neon pets. It glows on the inside of its triangular ears, paws, nose, and tail. 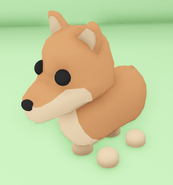 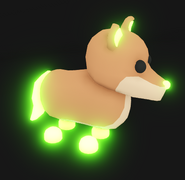