Adopt Me! Wiki
Register
Don't have an account?
Sign In
Advertisement
in: Pets, Limited, Fossil Egg Pets,
and 7 more

View source
watch 02:30
Dead Cells Final DLC - The Loop
Do you like this video?
Play Sound

The Dilophosaurus is a limited rare pet, which was added to Adopt Me! on October 10, 2020. Its release was confirmed in the Fossil Isle Excavation Event, which started on October 2, 2020. As it is now unavailable, it can only be obtained through trading or hatching any remaining Fossil Eggs. Players have a 25% chance of hatching a rare pet from the Fossil Egg, but only a 8.33% chance of hatching a Dilophosaurus.

The Dilophosaurus features a green dinosaur with a beige underbelly and a pink neck frill that has a purple edge. Part of its face is purple and there are two pink crests on the top of its head. Its arms are green while its back legs are green with purple claws. There are several spikes along its head, body, and tail. It has small white teeth inside its mouth.

Here are the tricks the Dilophosaurus learns in order:

The Neon Dilophosaurus glows bright blue on the crest on its head, spikes, and claws. 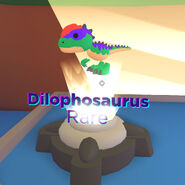 The Dilophosaurus on display in the Fossil Isle Excavation. 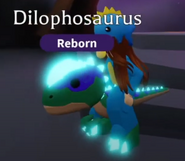 A Dilophosaurus in-game.
Community content is available under CC-BY-SA unless otherwise noted.
Advertisement