watch 02:45
Wiki Targeted (Games)
Do you like this video?
Play Sound

The Diamond Unicorn is a recolor of the Unicorn. It has a diamond colored body, a golden horn and mane, and tail. Its colors are opposite to that of a pet from the Golden Egg. At night, the color changes and its body becomes a dark blue color while the mane and tail become a darker yellow.

The Neon version of the Diamond Unicorn glows bright yellow on its mane, horn, and tail. This version's color can be different in the day than it is at night.

A Diamond Unicorn during the day. 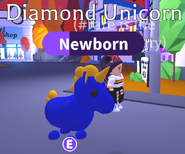 A Diamond Unicorn at night. 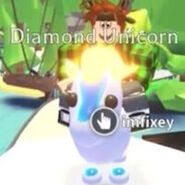 A player riding a Mega Neon Diamond Unicorn.
Add a photo to this gallery
Retrieved from "https://adoptme.fandom.com/wiki/Diamond_Unicorn?oldid=305771"
Community content is available under CC-BY-SA unless otherwise noted.