Adopt Me! Wiki
Register
Don't have an account?
Sign In
Advertisement
in: Pets, Legendary, Star Rewards,
and 3 more

The Diamond Griffin is a re-skin of the regular Griffin that is recolored in blue and yellow and a different texture. It has a metallic-blue diamond body with golden wings, golden eyebrows, and a golden beak. In the day, the body color of the Diamond Griffin remains metallic blue when indoors and becomes silvery-white in certain areas when under the sun. At night, the color changes and its body becomes a non-metallic dark blue color while the golden areas become a darker yellow.

Here are the tricks the Diamond Griffin learns in order:

The Neon Diamond Griffin glows bright yellow on its wings, eyebrows and beak. 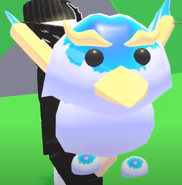 A Neon Diamond Griffin in the day.

A Neon Diamond Griffin at night. 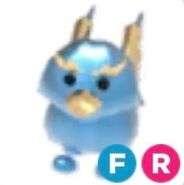 The Diamond Griffin in a player’s inventory.
Community content is available under CC-BY-SA unless otherwise noted.
Advertisement