Adopt Me! Wiki
Register
Don't have an account?
Sign In
Advertisement
in: Star Rewards, Pets, Legendary Pets,
and 4 more

The Diamond Egg is a legendary egg in Adopt Me! which was released on March 20, 2020, along with the Golden Egg as an item in the Star Rewards update.

The Diamond Egg can hatch three legendary pets, with the chances of obtaining each pet being 33.3% (1/3). These three pets are the Diamond Unicorn, Diamond Dragon, and Diamond Griffin.

After the Golden Egg is obtained, the player's login streak stays, but their stars will reset to 0. All the Star Rewards would remain the same except the Golden Egg, which would be replaced by a Diamond Egg. A player must then earn 660 stars to obtain the Diamond Egg, resulting in a total of 1320 stars required to be collected in order to receive this egg. After having collected their Diamond Egg, players get a Golden Egg upon completing their Star Rewards for the third time, and so on.

Players must acquire the Golden Egg and other Star Rewards items preceding it before obtaining this egg.

The Diamond Egg is an oval shaped, turquoise blue egg. At night, its color turns to a royal blue. It features the same shape model as the Pink Egg, Blue Egg, Pet Egg, and Golden Egg, with only their colorings being different. 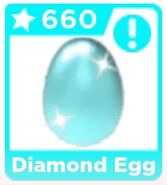 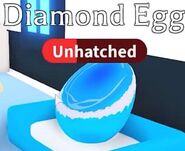