Adopt Me! Wiki
Register
Don't have an account?
Sign In
Advertisement
in: Pets, Legendary, Legendary Pets,
and 3 more

It is a golden and blue re-coloration of the Dragon/Golden Dragon pet. It has a metallic-blue body with golden claws, golden horns, golden underbelly, and golden wing membranes. In the day, the body color of the Diamond Dragon remains metallic blue when indoors and becomes silvery-white in certain areas when under the sun. At night, the color changes and its body becomes a non-metallic dark blue color while the golden areas become a darker yellow.

Here are the tricks the Diamond Dragon learns in order:

The Neon Diamond Dragon has a glowing gold color on the wing membranes, underbelly, fangs, and horns.

The Mega Neon Diamond Dragon glows in the same areas as the Neon version, but shines in a cycle of pink, white, and blue. 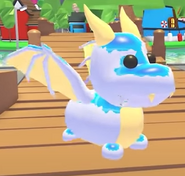 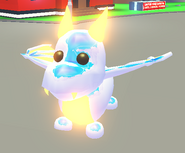 A Neon Diamond Dragon in the day.

A Neon Diamond Dragon at night. 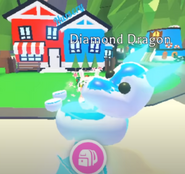