Adopt Me! Wiki
Register
Don't have an account?
Sign In
Advertisement
in: Pets, Events, Lunar New Year (2022),
and 10 more

The Dancing Dragon is a legendary pet in Adopt Me!, which was released during the Lunar New Year (2022) event. It could be obtained by purchasing it for

800. As the event has ended, it can now only be obtained through trading.

The Dancing Dragon features a long, red wingless dragon with a yellow underbelly. It resembles the Frost Fury model with a different combination of colors. It has a long, spiked yellow tail, four intense red and yellow feet, and yellow spikes on the top part of its back. On its head, it has two brown antlers, two red ears, yellow whiskers, two yellow eyebrows, and two small black eyes.

Here are the tricks the Dancing Dragon learns in order:

The Neon Dancing Dragon glows bright yellow on its eyebrows, around its eyes, whiskers, claws, underbelly, the spikes along its back, and the tip of its tail. 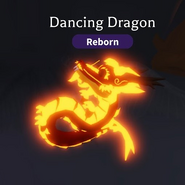 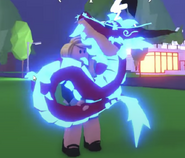 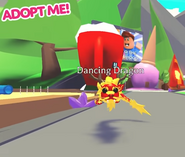 A teaser image of the Dancing Dragon.
Community content is available under CC-BY-SA unless otherwise noted.
Advertisement