The Crow has black feathers, a dark gray beak, dark gray talons, a feathery tail, two black eyes, two small feathers on its head, and black wings. It has a similar model to the Parrot, but has different colors.

Listed below are the tricks a Crow learns in order:

The Neon version of the Crow glows bright white everywhere on its body except for its beak, eyes, and feet, resulting users to mistake it for a dove; however, a dove has not been added to Adopt Me!.

The Mega Neon Crow glows same areas as the Neon version; it shifts from pink to orange, then to yellow.

A player holding a Crow. 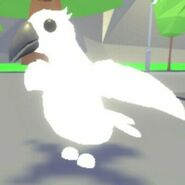