The Crocodile is one of the seven pets that could be obtained from the Jungle Egg in Adopt Me!. It is classified as an ultra-rare pet, and players had a 7.5% chance of hatching one from a Jungle Egg.

The Crocodile was added into the game with the other jungle pets on August 30, 2019. Since the Jungle Egg was replaced by the Farm Egg, players can only obtain it from trading with other players, or by hatching one from a Jungle Egg in their inventory. The other ultra-rare pet from the Jungle Egg is the Platypus.

The Crocodile is emerald green and has a long snout lined with white teeth. It has dark green spikes going down its back all the way to its tail; its underbelly is a light shade of green. It has four green semicircle-like feet.

Here are the tricks the Crocodile learns in order:

The Neon version of the Crocodile glows bright green on its spikes and feet.

When made Mega Neon, the spikes and feet cycle through the colors of the rainbow. 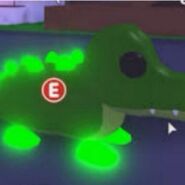 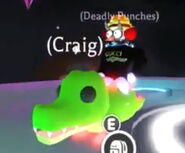 Mega Neon Crocodile
Add a photo to this gallery
Retrieved from "https://adoptme.fandom.com/wiki/Crocodile?oldid=129081"
Community content is available under CC-BY-SA unless otherwise noted.