View source
watch 02:34
Fire Emblem Warriors: Three Hopes - The Loop
Do you like this video?
Play Sound
Not to be confused with Croc Plush.

The Crocodile is emerald green and has a long snout lined with small white teeth. It has two beady black eyes on the sides of its head. It has dark green spikes going down its back all the way to its tail; its underbelly is a light shade of green. It has four green web-like feet, similar to the Platypus. The Crocodile opens and closes its snout as part of its animation.

Here are the tricks the Crocodile learns in order:

The Neon version of the Crocodile glows bright green on its spikes and feet. 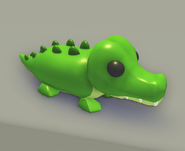