Adopt Me! Wiki
Register
Don't have an account?
Sign In
Advertisement
in: Pets, Common, Bucks,
and 11 more

View source
watch 02:34
Fire Emblem Warriors: Three Hopes - The Loop
Do you like this video?
Play Sound
Not to be confused with Broken Egg.

The Cracked Egg is a common egg in Adopt Me! that can be found and bought for

350 in the Nursery. It can also be obtained for free from the Daily Reward every consecutive thirty days a player logs in, or through trading.

It is most likely to hatch into a common pet (45%) and has the lowest chance of hatching into a legendary pet (1.5%), compared to the other eggs in the Nursery. This egg takes four tasks to hatch.

The Cracked Egg features an egg with a brown-colored eggshell, with a crack on top. Due to its crack, the edges are jagged, the orange yolk and white albumen are visible. 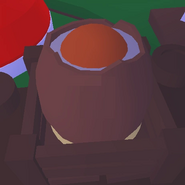