Adopt Me! Wiki
Register
Don't have an account?
Sign In
Advertisement
in: Houses, Robux, Interactable,
and 3 more

The Cozy Cabin is one of the houses in Adopt Me! that can be bought using Robux. Players can buy the Cozy Cabin for

The Cozy Cabin features a two-story, brown-colored cabin. It has a curved roof and small bushes, which are covered in a layer of snow. At the front of the house, on both its right and left sides, it has two slightly curved, glowing rectangular windows, as well as two snow-covered trees. There is a small brown arch in front of the doorway, along with a chimney on the roof. The chimney lets out a constant smoke animation.

Adopt Me!'s thumbnail when the Cozy Cabin was released. 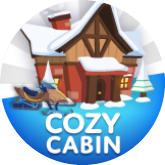