Adopt Me! Wiki
Register
Don't have an account?
Sign In
Advertisement
in: Car Dealership, Vehicles, Limited,
and 5 more

View source
watch 02:52
Roblox: DeepWoken - The Loop
Do you like this video?
Play Sound
Not to be confused with Tiny Convertible.

Trading. Was obtainable in the Car Showroom for

2,100. The Convertible is no longer available for purchase and can only be obtained through trading.

The Convertible was presumably replaced with the Muscle Car, as that is now the fastest and most expensive car that is currently available in the showroom, although it is less expensive than the Convertible, costing

The Convertible used to be the second-fastest vehicle that players could buy in Adopt Me!, only beaten by the GoKart. As more vehicles were added, however, the Convertible became less unique, and combined with the fact that it was too expensive for new players to obtain and that it only had two seats, made it a bad offer even compared to its cheaper counterparts like the Car. It was eventually completely removed from the Car Showroom sometime in late 2018, when it was later replaced by the Muscle Car.

The old design of the Convertible was a very basic, blocky design, similar to that of the Car's old design, but without a roof. The Convertible got remodeled in 2018 to better resemble a modern real-life convertible. Its new design mostly resembles a Nissan 370z roadster. The car's color could be changed. 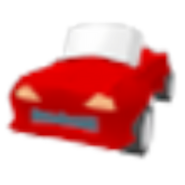 The Convertible's old design in a player's inventory.

The rear end of the Convertible.

The Convertible in-game.
Community content is available under CC-BY-SA unless otherwise noted.
Advertisement