Adopt Me! Wiki
Register
Don't have an account?
Sign In
Advertisement
in: Shops, Baby Shop, Toys,
and 5 more

View source
watch 02:53
GTA: The Criminal Enterprises - The Loop
Do you like this video?
Play Sound
Not to be confused with Rainbow Rattle.

The Clouds & Rainbow Rattle is a rare rattle in Adopt Me! which can be found and bought in the Baby Shop for

The Clouds & Rainbow Rattle is a white rattle topped with a rainbow, which stretches from two clouds at either end. It has a cloud as its handle. Each of these clouds are decorated with two beady black eyes and a curved smile. The rainbow has only three colors: orange, green, and blue. 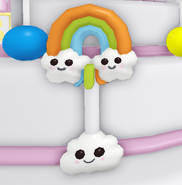 The Clouds & Rainbow Rattle on display in the Baby Shop. 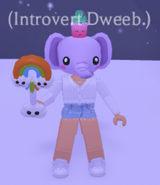