Adopt Me! Wiki
Register
Don't have an account?
Sign In
Advertisement
in: Christmas Event (2019), Gamepass, Christmas Vehicles,
and 18 more

The 2019 Christmas Event was an event in Adopt Me! that lasted from December 14, 2019 to January 11, 2020. There were features, activities, items, and pets which were only available during the event.

The event currency was

Gingerbread, which could be earned by participating in the activities below or by buying them with

Robux. It could be spent on exclusive items at the Christmas Gift Shop. During the event, there was an Advent Calendar. At the end of the event, on the last day of the Advent Calendar, players got a Reindeer as a reward for playing Adopt Me! during the holiday season.

If a player earned

1,440, they could then use the Gingerbread to buy a Christmas Gift. If they earned

4,300, they could then use the Gingerbread to buy a Golden Gift. Christmas/Golden Gifts had 11 possible prizes.

Every day in December leading up to Christmas, players would open up doors and obtain Christmas-themed items, such as Christmas toys,

Gingerbread, Cure-All Potions, and a Reindeer.

Every two Adopt Me! days in the server, the gingerbread men on the frozen river replenish, and players can collect them by skating on the ice. Every gingerbread man collected is worth

10. Players must avoid crashing into the waddling penguins on the lake. If they crash into the penguins, they will fall and drop

60. These dropped gingerbread men must be collected before disappearing. (The penguin will stop when crashed into, as to make recovering Gingerbread easier.)

Every two Adopt Me! days in a server, Santa would invite everyone on the Adoption Island to train, and fly, all four of his Reindeers, which included the following: Rudolph, Dasher, Blitzen, and Comet. The player must choose one of the four Reindeers to train. The player could ride them outside and then start flying over the Winter Village, collecting the floating Gingerbread.

After a while, the Reindeer would say a message that states they are tiring out and would soon demand to return back to their stable. If the player refuses to let them rest, the Reindeer will fall onto the ground, resulting in a blackout on their screen, deducting

200 as a penalty. The player should repeat the training for each of the three other Reindeers.

It is possible to interact fully with the Reindeer as a pet, as they are coded with the pet functions. However, they cannot be kept permanently, as they will have to be sent back to the stable after a while. The four Reindeers included in the activity also could not be traded.

Every day in Adopt Me!, players could collect 7 ornaments related to Christmas. These were the Snowflake Ornament, Christmas Ball Ornament, Candy Cane Ornament, Elf Ornament, Star Ornament, Santa Ornament, and Reindeer Ornament. Once collected, the player could place a free Christmas Tree in their house and toss each ornament onto the tree, which would add a set amount of spirit based on the rarity of the ornaments (15, 15, 25, 25, 40, 60, and 100 respectively).

Every morning in the server, Santa Claus will 'arrive' at the player's house and deliver presents under the tree, which would consist of Gingerbread. The more spirit their Christmas Tree has, the more Gingerbread the player will receive.

Below are the 7 ornaments that were available during the 2019 Christmas Event:

There were a total of 11 exclusive obtainable pets that players could obtain in the 2019 Christmas Event. All of these pets are now unobtainable and can only be obtained via trading.

Some of the pets in this update were renamed due to the Dress Your Pets Live Event. Such as the Santa Dog, which was renamed to Dalmatian, and the Santa Hat was given to the owner. The Elf Hedgehog and Elf Shrew were also renamed to Hedgehog and Shrew and the owners received Elf Hats if they had owned a Hedgehog or Shrew before the update. 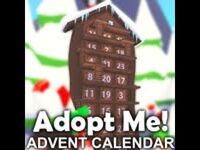 Gingerbread, the currency of this event. 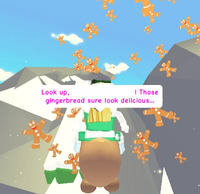 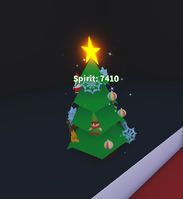 Ornaments to decorate the Christmas Tree.

Exchange rate of Robux to Gingerbread.
Community content is available under CC-BY-SA unless otherwise noted.
Advertisement