Adopt Me! Wiki
Register
Don't have an account?
Sign In
Advertisement
in: Pets, Uncommon, Uncommon Pets,
and 2 more

The Chocolate Labrador is one of the uncommon pets in Adopt Me!. It can be obtained by hatching a Cracked Egg (

The Chocolate Labrador is brown and has dark brown ears and legs. It has two beady black eyes, a nose with a short pink tongue that hangs out of its mouth, and a stubby brown tail. It is a recolor of the Dog, with a brown body instead of beige.

Listed below are the tricks the Chocolate Labrador learns in order:

The Neon version of the Chocolate Labrador glows yellow on its ears and paws.

The Mega Neon version of the Chocolate Labrador's cycle through the colors of the rainbow in the same areas as its Neon form. 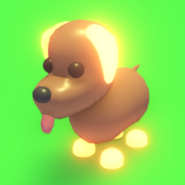