Adopt Me! Wiki
Register
Don't have an account?
Sign In
Advertisement
in: Interactable, Pet Accessories, Rare,
and 5 more

View source
watch 02:59
Wiki Targeted (Games)
Do you like this video?
Play Sound
Not to be confused with Chicken, Chick, or Chick Head.

The Chick Hat is a rare pet accessory in Adopt Me! that could be found in the Easter Event (2021). It could be bought in the event for 250 Eggs, which were hidden around the map for players to find. The Chick Hat is no longer obtainable, and can now only be obtained by trading.

The Chick Hat features a Chick with a bright yellow body, yellow wings with black eyes, a orange beak, and small orange feet. It closely resembles the Chick.

The Chick Hat at the Easter Stand.

The Chick Hat in a player's inventory. 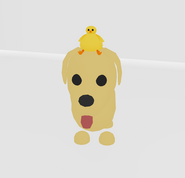 The Chick Hat on a Dog.
Community content is available under CC-BY-SA unless otherwise noted.
Advertisement