View source
watch 02:53
GTA: The Criminal Enterprises - The Loop
Do you like this video?
Play Sound
Not to be confused with Chicken, Chick Hat, Chick Head, or Chick Plush.

The Chick is a limited common pet in Adopt Me! that could be obtained for free during the Easter 2020 Egg Event. It can also be obtained through trading. When a player hatches the Easter 2020 Egg, there is a 100% chance of hatching the Chick; if the player hatched the egg during the event, they also got a badge and an exclusive avatar item, the Chick Head. This egg can still be hatched and players can still obtain a Chick out of it. However, the exclusive avatar item cannot be obtained anymore.

The Chick has small wings on both sides of its bright yellow body along with a tufted tail and small orange feet. It has a round yellow head, on top of which are two black eyes and an orange beak.

Here are the tricks the Chick learns in order:

In its Neon form, the Chick's tail and its two side wings glow a bright yellow.

In its Mega Neon form, the Chick cycles through the colors of the rainbow in the same areas as its Neon form.

A player holding a Chick. 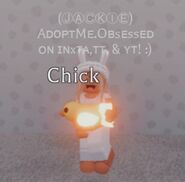 A player holding a Neon Chick. 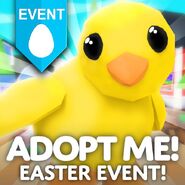 The Chick on Adopt Me!'s cover image during the 2020 egg hunt.
Community content is available under CC-BY-SA unless otherwise noted.
Advertisement