The Chameleon is a legendary pet in Adopt Me!. It was released on January 27, 2022, during the Task Board Update. It can be obtained by opening an RGB Reward Box at a 4.5% chance or through trading.

The Chameleon features a green-colored body with a pastel yellow underbelly and a curled tail. It has bright green stripes on its head and casque, with yellow-outlined stripes placed horizontally down its back. Additionally, the tips of its feet are pastel yellow. The Chameleon has two beady black eyes and black-colored nostrils.

Here are the tricks the Chameleon learns in order:

The Neon Chameleon glows cyan on the tips of its feet and stripes. 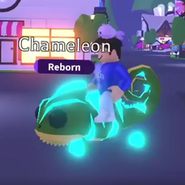 A player riding a Neon Chameleon. 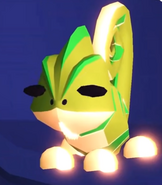 A teaser image of the Chameleon. 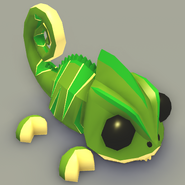 The Chameleon in-game.
Community content is available under CC-BY-SA unless otherwise noted.
Advertisement