Adopt Me! Wiki
Register
Don't have an account?
Sign In
Advertisement
in: Pets, Eggs, Interactable,
and 2 more

The Cat, as well as the Dog, are the two starter pets which players can obtain from the Starter Egg. If the player wants to obtain it, they must either trade for it, or purchase a Cracked Egg (

The Cat has a gray body, with two black eyes, two triangle shaped gray ears with slightly pink pastel insides, and a similarly colored nose. It also has stubby black whiskers and a gray tail matching its body.

Listed below are the tricks the Cat learns in order:

The Neon Cat glows pale pink on its ears, paws, whiskers, and nose.

The Mega Neon Cat glows in the same areas as a Neon Cat, except those areas cycle through the colors of the rainbow.

All the reskins of the Cat in Adopt Me!. 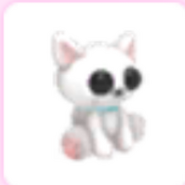 The Cat's counterpart, also known as the Cat Plush. 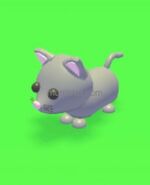 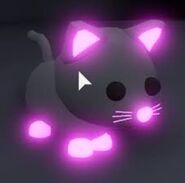