Increases the speed of the player when eaten.

The Candy Corn is a common food item in Adopt Me! that is shot out of the Candy Cannon. In the future, the Candy Cannon will be fixed to shoot out Candy (Currency) as it previously did. [1]

The Candy Corn is triangular shaped with yellow, orange, and white stripes.

It leaves a white trail when held, which fades around the back. 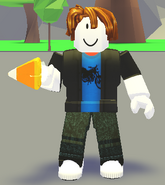 The Candy Corn in game.