Adopt Me! Wiki
Register
Don't have an account?
Sign In
Advertisement
in: Gamepass, Toys, Halloween,
and 12 more

The Candy Cannon is a legendary toy in Adopt Me! that could have been purchased for

The Candy Cannon can shoot an unlimited amount of Candy. The candy shot from the cannon turns into lollipops when a player picks it up. Now, they can only be eaten by pets. It used to increase the player's speed until they reset their character or leave the server, much like the effects of the Cookie, Hyperspeed Potion, Chocolate, Chocolate Drop, Chocolate Twist, Ice Tub, and the Cotton Candy. Players can only hold up to five Candy Corn at a time through collecting Candy from the Candy Cannon, but it is possible to obtain more than five Candy Corn through giving them away or trading them. 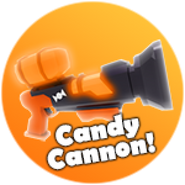 A player holding a Candy Cannon in the game.