Adopt Me! Wiki
Register
Don't have an account?
Sign In
Advertisement
in: Halloween Event (2019), Candy Trading Shop, Gameplay,
and 9 more

View source
watch 02:53
GTA: The Criminal Enterprises - The Loop
Do you like this video?
Play Sound
Not to be confused with Candy (Food).

This event occurs every night in Adopt Me!. In order to earn candies from this activity, players must find the randomly scattered Candy in Adoption Island. The scattered Candy takes the shape of candy corn, lollipop, or bat cracker. In total, there are 40 pieces of Candy that were dispersed around the map, and each piece of Candy that is found earns the player

30, making the maximum amount of Candy players can earn from the activity

Another way players could earn Candies is by playing a mini-game in the Graveyard, which takes the place of the Playground in Adopt Me!. Every time the task of bored arises in Adopt Me!, players go to the Graveyard, which replaced the Playground while this update was active. Players earn Candies through this event is through completing a mini-game. In this mini-game, there are three trials for free, but more can be purchased by paying

15. The maximum amount of Candies that can be earned each trial is

5,000, making the maximum amount of Candies that players can earn from all three trials is

Candy players can earn from this activity is

75 back then. Some items players could earn were the Pumpkin Rattle, which cost

1, the Teddy Skele, which cost

An image of the Candy Hunt. 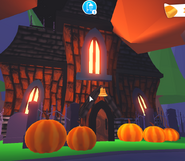 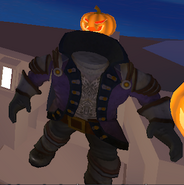 The Headless Horseman from 2017.
Community content is available under CC-BY-SA unless otherwise noted.
Advertisement