The Buffalo is a common pet in Adopt Me! that can be hatched from the Retired Egg. It was one of the first common pets to be released in the game. Players can also obtain it through trading.

The Buffalo has a brown body, two beady black eyes, and two white horns. Its overcoat (the body, feet, and a small section of its head) is a slightly darker brown than its face and lower body.

Here are the tricks a Buffalo learns in order:

The Neon Buffalo glows a bright emerald green on its two horns, nose, feet, and tail.

The Mega Neon Buffalo glows in the same areas as a Neon Buffalo, except those areas cycle through the colors of the rainbow. 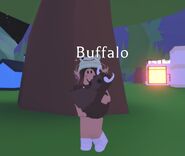 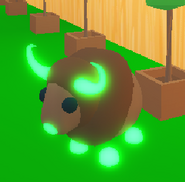