Adopt Me! Wiki
Register
Don't have an account?
Sign In
Advertisement
in: Vehicles, Robux, Gamepass,
and 4 more

The Bubble Car is a legendary four-seater vehicle which was added to Adopt Me! on August 5, 2021. It can be obtained through purchasing the Ultra Car Pack for

800, or through trading with other players. The gamepass contains the Magical Girl Car and the Wing Trunk Car along with this vehicle.

The Bubble Car is a futuristic, mostly light blue car with two orange headlights, a translucent roof with a blue tint, and four gray-colored seats. It also has four light blue wheels with gray axles. The rear of the car features a spoiler. Its hood has three orange hexagon-shaped lights and a white paw print emblem on the hood.

It is reminiscent of the Mercedes-Benz AVTR concept car. 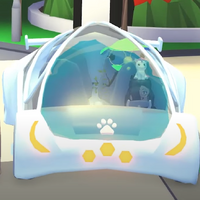 A player driving the Bubble Car.

The Bubble Car as seen in the promotional stand in the neighborhood near the exit tunnel.
Community content is available under CC-BY-SA unless otherwise noted.
Advertisement