Adopt Me! Wiki
Register
Don't have an account?
Sign In
Advertisement
in: Pets, Limited, Unavailable Pets,
and 5 more

The Brown Bear has a brown body and feet, round ears, beige inner ears, two beady black eyes, a small black nose, and a beige muzzle.

Listed below are the tricks that a Brown Bear learns in order:

The Neon version of the Brown Bear glows in reddish-brown on the inside of its ears, its muzzle, and on its paws.

The Mega Neon Brown Bear cycles through the colors of the rainbow in the same areas as the Neon form. 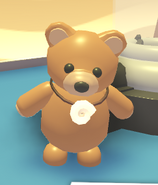 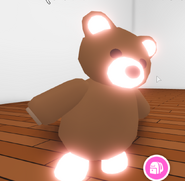 The Brown Bear on the Adopt Me!'s thumbnail.
Community content is available under CC-BY-SA unless otherwise noted.
Advertisement