250. However, it was removed in the new Pet Shop update which came out on February 22, 2020, for unknown reasons. It is now only unobtainable unless through trading.

The Bone Throw Toy features a long thin rod with curves along the opposite sides. This appearance, as true to its name, is made to imitate a pet bone.

Similar to all throw toys in the game, when thrown to an equipped pet, the pet would fetch the throw toy back to the player. 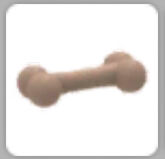 The Bone Throw Toy as seen in a players inventory.
Community content is available under CC-BY-SA unless otherwise noted.