The Blue Rider is a two-seated rare vehicle that can be obtained as a Star Reward when the player reaches 320 stars (about 120 days) or through trading.

Star Rewards and trading are the only viable ways to obtain the Blue Rider, as it can't be purchased with Bucks or Robux. It requires a lot of stars to obtain, making it difficult to acquire for new or casual players.

The Blue Rider is one of the four vehicles that can be obtained as a Star Reward, the other ones being the Human Bubble, the Rocket Racer and the Witch's Caravan.

The Blue Rider is a light blue classic motorcycle with dual exhausts and a color-matching sidecar. It has fluorescent yellow lights on and below the handlebars. Strangely, the Blue Rider is shown in a darker blue color without a sidecar in the Star Reward list and in the inventory.

A parked Blue Rider from the perspective of a baby

The Blue Rider as it appears in the Star Reward list: in a darker shade of blue and without a sidecar attached 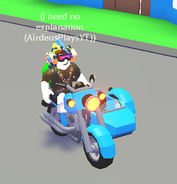 A player riding the Blue Rider

A pet on the blue rider.

A broken Blue rider
Add a photo to this gallery

Retrieved from "https://adoptme.fandom.com/wiki/Blue_Rider?oldid=159308"
Community content is available under CC-BY-SA unless otherwise noted.