The Black Panther has an almost entirely black body, including a black nose, black paws, and a black tail. It has triangle shaped black ears with gray inner ears, gray whiskers, and two gray eyes.

Listed below are the tricks the Black Panther learns in order:

The Neon version of the Black Panther has a glowing white tail, paws, nose, inner ears, and whiskers.

The Mega Neon version of the Black Panther glows in the same spots as the Neon Black Panther, but through the colors of the rainbow. 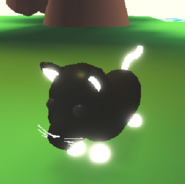 A Player holding a Black Panther.
Community content is available under CC-BY-SA unless otherwise noted.
Advertisement