Adopt Me! Wiki
Register
Don't have an account?
Sign In
Advertisement
in: Pets, Robux, Interactable,
and 4 more

The Black Chow-Chow is a legendary pet in Adopt Me! that was released in the VIP room refresh on July 28, 2022. It can be obtained through buying a Golden Bone for

249 or through trading. There is a 10% chance of obtaining a Black Chow-Chow from the Golden Bone.

The Black Chow-Chow's head and tail are black, with the tail having a gray tip. It has two ears with gray insides, two black eyes, a brown nose on top of its muzzle, and a blue tongue sticking out of its mouth. Its body is circular-shaped and black with a gray front and underbelly. It has four black colored feet.

Listed below are the tricks the Black Chow-Chow learns in order:

The Neon Black Chow-Chow glows dark blue around its muzzle, the fur around its body, the insides of its ears, and the back of its tail.

No Mega Neon Black Chow-Chow has been made yet. 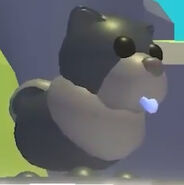 A teaser image of the Black Chow-Chow. 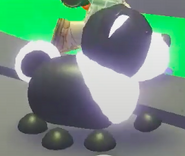