Adopt Me! Wiki
Register
Don't have an account?
Sign In
Advertisement
in: Vehicle Dealership, Vehicles, Bucks,
and 7 more

View source
watch 02:34
Fire Emblem Warriors: Three Hopes - The Loop
Do you like this video?
Play Sound
Not to be confused with Bicycle.

The Bike is a common single-seater vehicle in Adopt Me!. It could be obtained by purchasing it in the Vehicle Dealership for

75. As it was removed from the Vehicle Dealership on March 3, 2022, it is now only obtainable through trading.

75, the Bike is the cheapest vehicle in Adopt Me!. Its good handling makes it a useful vehicle for new players; however, it is not advisable to rely on the Bike in the long run due to its slow speed and lack of passenger seats. Carrying babies or pets while riding will make the Bike go slower because, in theory, the player would weigh more.

The Bike is a fairly simple looking bicycle. Judging by the size of the wheels, it is presumably meant to resemble a BMX bike.

The Bike, along with all the other vehicles that were available for purchase in the Vehicle Dealership, had multiple color options for players to choose from. Its color cannot be changed after its purchase; the only way to change it was when it was bought from the Vehicle Dealership. Even if it is obtained via trading, the color is not changeable. 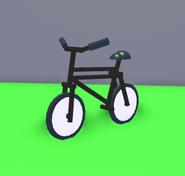 A Bike as seen in-game.

A player using the Bike.

The Bike previously displayed in the Car Showroom.
Community content is available under CC-BY-SA unless otherwise noted.
Advertisement