Sells toys in the Toy Shop

Bethink is the creative director for the Adopt Me! team and is also an NPC in the game. He was found behind the counter in the Toy Shop but on July 14, 2022, Bethink was replaced with Javier, an NPC.

Bethink has pink hair, black glasses, golden antlers, a black hat, and a domino crown on his head. He wears overalls on top of a white shirt, has black pants and shoes, and a brown pegleg on his left foot. He has golden armor on each of his arms and holds a golden Bloxy Award trophy in his right hand.

This is what Bethink says when a player speaks to him:

"Welcome to my Toy Shop! I love to build toys... Heh. Some people say I built this world but that's just a rumor..." 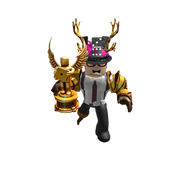 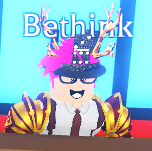 Bethink at the old Toy Shop.
Community content is available under CC-BY-SA unless otherwise noted.
Advertisement