Adopt Me! Wiki
Register
Don't have an account?
Sign In
Advertisement
in: Pet Accessories, Hat Shop, Ultra Rare,
and 7 more

2,000. It was showcased with a Dog wearing the accessory while sitting on a golden throne inside the Hat Shop. It was replaced with new pet accessories, but later returned.

The base of the Bat Wings is black and the sinew is red. It looks very similar to the Bat Dragon's wings. 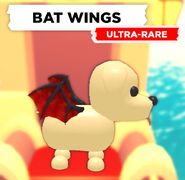 The Bat Wings on a Dog.
Community content is available under CC-BY-SA unless otherwise noted.
Advertisement