Adopt Me! Wiki
Register
Don't have an account?
Sign In
Advertisement
in: Pets, Halloween Event (2019), Legendary Pets,
and 9 more

The Bat Dragon is a limited legendary pet that was released during the Halloween Event (2019) in Adopt Me!. It cost

500 if the Candies were to be purchased with Robux). The Bat Dragon was added during the second part of the Halloween Event (2019), along with the Evil Unicorn. Since the event has ended, it is now only obtainable through trading.

The Bat Dragon has a light brown body, two small orange horns on its head, two beady black eyes, black bat-like ears with a light brownish color inside, an orange nose on its snout, black and red curved wings, and two mini fangs sticking out of its mouth. Similar to the Bandicoot, its underbelly is a light tan color, with the tip of its tail being black with an orange tip. It has orange tail spikes on the back of its body.

Here are the tricks the Bat Dragon learns in order:

The Mega Neon Bat Dragon's nose, horns, wings, ears, and tail spikes cycle through white, lavender, turquoise, and magenta, being one of the few pets not cycling the rainbow.

The Bat Dragon on the Halloween Event (2019) thumbnail. 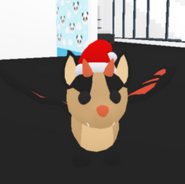