Adopt Me! Wiki
Register
Don't have an account?
Sign In
Advertisement
in: Halloween Event (2020), Halloween, Candy,
and 13 more

The Bat Box is a limited rare gift in Adopt Me!. It could be obtained from the Halloween Event 2020 by purchasing it in the Halloween Shop for

The Bat Box is a golden, round bird cage, with a dark violet/magenta cloth over it. It has golden bat-like wings as the handle on top of the box. The Bat Box also has white sparkles surrounding it. 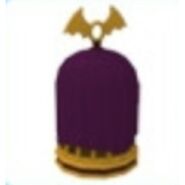 The Bat Box in a player's inventory.
Community content is available under CC-BY-SA unless otherwise noted.
Advertisement