Adopt Me! Wiki
Register
Don't have an account?
Sign In
Advertisement
in: Toys, Bucks, Limited,
and 8 more

Enables the player to bounce up and down

499 (Small, Big, and Massive Gifts)
The Banana Pogo is a limited uncommon toy in Adopt Me!. Previously, it could be used to fulfill the 'Bored' ailment for babies, but this ability was taken away and the pogo cannot be used to fulfill the ailment anymore. The Banana Pogo was previously obtainable in an old Gifts rotation, but is now unobtainable unless through trading.

The Banana Pogo, true to its name, is a yellow banana with a black pole through it. It has brown tips and black handholds and footholds. 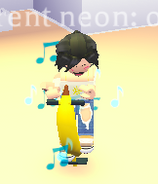 A player bouncing with a Banana Pogo.
Community content is available under CC-BY-SA unless otherwise noted.
Advertisement