Adopt Me! Wiki
Register
Don't have an account?
Sign In
Advertisement
in: Pets, Pet Shop, Robux,
and 5 more

600 but it could have been purchased for

300 during the Summer Sale. Players can purchase the Axolotl in the Pet Shop.

The Axolotl has a pink body with darker pink spots on its back, pink round feet, and a pink tail. It has brown nostrils, two black beady eyes, and darker pink six gills with dark reddish-pink color insides.

Here are the tricks the Axolotl learns in order:

The Neon Axolotl glows a bright yellow color in the insides of its gills, and on the spots that run down from the top of its head to end of the tail.

The Mega Neon Axolotl glows in the same areas as the Neon Axolotl, except that it cycles through the colors of the rainbow.

A teaser image of the Axolotl.

The Axolotl on Adopt Me!'s thumbnail. 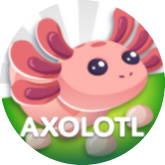 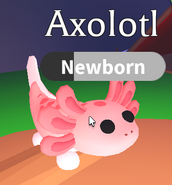 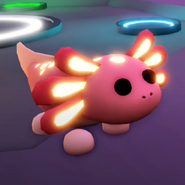 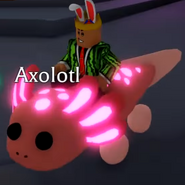 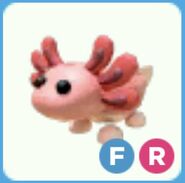 An Axolotl in a player’s inventory.
Community content is available under CC-BY-SA unless otherwise noted.
Advertisement