Adopt Me! Wiki
Register
Don't have an account?
Sign In
Advertisement
in: Pets, Bucks, Interactable,
and 17 more

The Aussie Egg is a limited legendary egg in Adopt Me! that was released on February 29, 2020, and replaced the Farm Egg. It left on October 10, 2020, and was replaced by the Fossil Egg. It cost

The Aussie Egg features perked-up, dark brown ears, with a light, but dull, brown center. At the front of the egg, there is a small, light-brown pouch, which contains a smaller brown egg. The Aussie Egg is meant to resemble a Kangaroo that could be hatched from the egg itself. 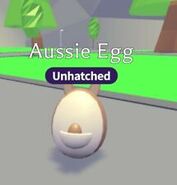 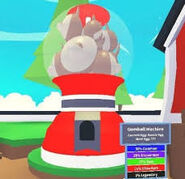 The Aussie Eggs in the Gumball Machine.
Community content is available under CC-BY-SA unless otherwise noted.
Advertisement