Adopt Me! Wiki
Register
Don't have an account?
Sign In
Advertisement
in: Toys, Gifts, Uncommon,
and 7 more

The Armchair Float is an limited uncommon toy that was added to the game on March 18, 2021, as part of the new gifts rotation. It is no longer in the current Gifts rotation, and can only be obtained through trading. It is similar to the floats found in the Pool Store and can float on both land and water.

The Armchair Float resembles a plastic sofa. It has blue armrests, a white seat, and a blue backrest. 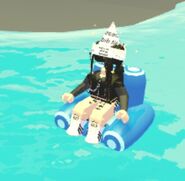 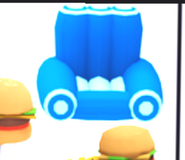 The Arm Chair Float at Gifts.
Community content is available under CC-BY-SA unless otherwise noted.
Advertisement