Adopt Me! Wiki
Register
Don't have an account?
Sign In
Advertisement
in: Pets, Legendary, Legendary Pets,
and 9 more

The Arctic Reindeer has a pure white body, legs, two beige antlers on its head, and two black, beady eyes. It also has a gray tail on its back and a brown nose.

Listed below are the tricks the Arctic Reindeer learns in order: 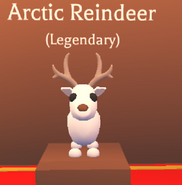 The Arctic Reindeer displayed in the Christmas Shop. 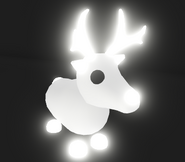