Adopt Me! Wiki
Register
Don't have an account?
Sign In
Advertisement
in: Toys, Star Rewards, Ultra Rare,
and 3 more

300 Stars
The Angelic Propeller is an ultra-rare toy released as an item of the Star Rewards update in Adopt Me!. It can be obtained after gaining 300 Stars from the Star Rewards, which is equivalent to logging in for 110 days. To interact with this item, the player can click anywhere on their screen to be propelled upwards. To stop, a player must jump while the propeller is in use.

The Angelic Propeller features a propeller with a pair of white wings on top, attached to a yellow pole at the bottom. 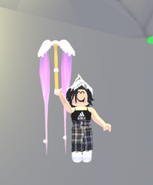 The Angelic Propeller in use.
Community content is available under CC-BY-SA unless otherwise noted.
Advertisement