The Ancient Dragon is a legendary pet that was released in Adopt Me! on July 21, 2022. Players are able to obtain it from a Royal Egg, Pet Egg, or a Cracked Egg. It is also obtainable though trading.

The Ancient Dragon has a yellow body and wings. It has thick bushy white eyebrows, white chest hair, and a white beard. It also has a pair of white horns on top of its head and has two small white fangs protruding from its mouth.

Listed below are the tricks the Ancient Dragon learns in order:

The Neon Ancient Dragon glows a mellow pink on its inner wings, horns, and tail. 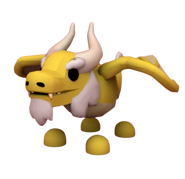 A teaser image of the Ancient Dragon. 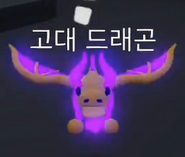