Adopt Me! Wiki
Register
Don't have an account?
Sign In
Advertisement
in: Toys, Uncommon, Limited,
and 8 more

The Ammonite Flying Disc (formerly known as Ammonite Frisbee) is an uncommon toy in Adopt Me!, that could previously be found when excavating for fossils at the Fossil Isle Excavation. To interact with this item, a player can click or press their screen to throw. When thrown, a player's equipped pet will fetch it and bring it back to the player. This item can now only be obtained through trading as its respective event has left. 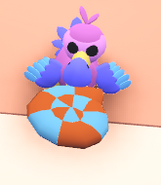