Adopt Me! Wiki
Register
Don't have an account?
Sign In
Advertisement
in: Monkey Fairground Event, Legendary, Legendary Pets,
and 7 more

The Albino Monkey is a limited legendary pet in Adopt Me! and was first released in the Monkey Fairground Event. To obtain this pet, players must open a Premium Monkey Box, which costed

195. As the event has ended, it is now currently only obtainable through trading.

This pet is currently unobtainable unless through trading or by opening a Premium Monkey Box if a player still happens to have one, as its respective event has ended.

The Albino Monkey uses the same model as the normal Monkey, except it is a creamy, slightly-tinted white. It also features a tuft of gray on its head.

Listed below are the tricks the Albino Monkey learns in order: 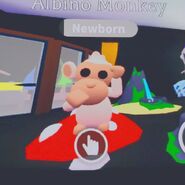