Adopt Me! Wiki
Register
Don't have an account?
Sign In
Advertisement
in: Pets, Bucks, Limited,
and 6 more

The Abyssinian Cat is a rare pet in Adopt Me! that was released on February 15, 2022. Players can obtain this pet through trading or purchasing it for

750 in the Desert Shop when the shop is on rotation.

The Abyssinian Cat has black fur, whiskers, paws, a tail, and golden markings around its black beady eyes. It has pointed ears with golden inner ears that resemble pyramids.

Here are the tricks the Abyssinian Cat learns in order:

The Neon Abyssinian Cat glows orange on its paws, inner ears, and around its eyes. 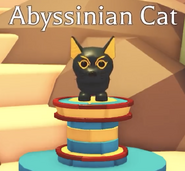 The Abyssinian Cat on display in the Desert Shop. 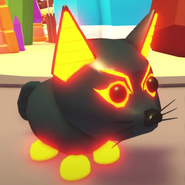 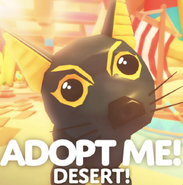