Adopt Me! Wiki
Register
Don't have an account?
Sign In
Advertisement
in: Pets, Event Rarity, Event Pets,
and 6 more

Free, could be retrieved from outside the Nursery on April Fools 2021.

The 2D Kitty was an event pet in Adopt Me! that was released on April 1, 2021, as a part of the April Fools' Day 2021 Update. This pet was found in front of the Nursery and could be obtained through talking to the NPC, Burt. It was later removed on April 2, 2021, and is now unavailable from the game.

The 2D Kitty came with the ability to be flyable and rideable and was full-grown. There was no way for a player to simultaneously possess two 2D Kitties, as only one could be obtained from talking to Burt near the Nursery, and it could not be traded or given away.

The 2D Kitty disappears from the players' inventory after leaving the game, similar to the Healing Apple, Teacher's Apple, Marshmallow, Cup of Water, Cup of Coffee, Donut, and the Pet Rock.

The 2D Kitty features a black and white sketched-out cat, resembling a drawing of a cat. It has two pointy 2D ears on top of its head as well as a small tuft of fur, two whiskers on each side of its head, two drawn-out eyes, a mouth, a tail, and a 2D circle as its body.

Here are the tricks the 2D Kitty learns in order: 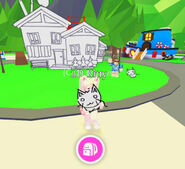 A player holding the 2D Kitty.

A player riding the 2D Kitty. 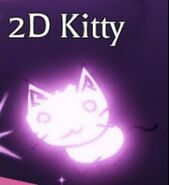 What a Neon 2D Kitty could look like, made by going near the crystals in the Neon Cave.
Community content is available under CC-BY-SA unless otherwise noted.
Advertisement